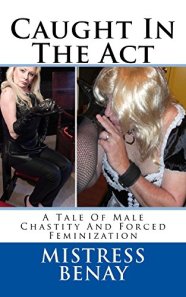 Caught In The Act: A Tale Of Male Chastity And Forced Feminization by Mistress Benay

Go to Amazon to get your own copy of “Caught In The Act: A Tale Of Male Chastity And Forced Feminization”

“Caught In The Act – Part II: The Cuckolded Sissy” by Mistress Benay 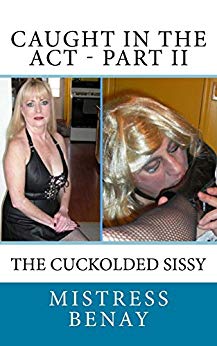 Brandon sat there in the darkness of the dungeon for probably another hour or so before the lights came on, and he then heard the sound of heels coming down the wooden steps. After being in the dark for so long, it took a while for Brandon’s eyes to adjust to the light, and when they did, he saw Heather standing there wearing only a black leather bra, black leather thong, and a pair of thigh high black leather boots with five inch stiletto heels.
Heather took a pair of leather restraints off of the wall, walked over to the jail cell, and said “Turn around, and put your arms behind your back slave”.
When Brandon complied with Heather’s order, she reached through the bars, and secured his wrists into the leather cuffs. She then locked them together, immobilizing his arms behind his back. She then went over to the red button on the wall, and pressed it, which caused the lock on the jail cell door to click open.
Heather opened the cell door, and pulled Brandon out into the middle of the dungeon, where she pushed him down onto his back on top of the bondage table. She pulled a heavy leather hood which only had a small opening for the nostrils down over his head, and she buckled up the numerous straps and secured the hood tightly around Brandon’s head. She attached one end of a nickel snap hook to the ring on the top of the hood, and snapped the other end into the eye hook at the top of the bondage table. Brandon was now unable to even lift his head up off of the table. To further immobilize Brandon, Heather ran a wide leather strap across his chest and around the table, tightening the strap up until it dug into his skin.
At that point, Heather then locked a set of leather cuffs around Brandon’s ankles, and attached a chain from the loop on the ankle cuffs to the overhead bar of the suspension device. She went over to the control on the wall, pressed the button, and the bar of the suspension device began rising.
As the bar of the suspension device rose up into the air, Brandon’s legs were pulled straight up off of the table. Heather made sure that she continued raising the bar until Brandon’s ass was totally off of the table. She then pulled his panties up over his knees, making his ass totally accessible to her.
Brandon began moaning because his body was now restrained into a very uncomfortable and helpless position as he laid on top of his arms, while he was unable to move his head at all. When Heather heard his moans, she said “Brandi, what are you moaning about? I haven’t even started to punish you yet. Just wait a few minutes, and I’ll give you something to really moan about!”
Brandon was now terrified about what was going to happen to him, and he cursed himself for going down into the basement when he knew that he should never have done that.
Heather went over to her implements of pain on the wall, and picked out a very intimidating black leather paddle which was lined with short metal spikes. As she surveyed Brandon’s helpless ass, she said “For starters, you will receive ten strokes of my paddle for not properly completing your chores today”.
Then without further ado, Heather brought the paddle down hard across Brandon’s ass, and he immediately screamed out from the searing pain which spread across his ass cheeks. Before he could even fully process the burning in his ass, Heather hit his ass cheeks again, even harder this time.
By the time that she had administer all ten strokes of the paddle, Brandon was crying hysterically, and even the heavy leather of the hood couldn’t muffle his pleas for mercy.
At that point, Heather went back over to the wall of the dungeon, and this time she picked out a short braided leather whip, and returned to Brandon, and said “For not having dinner ready for me when I returned home from work today, you will receive ten lashes from my whip”.
Brandon tried to tell Heather that he couldn’t take any more pain, but his attempts were futile, as she hit him with the braided whip, punishing the already sore cheeks of his ass. As each lash of the whip came down harder and harder upon his ass, Brandon screamed out, and felt like he would lose consciousness any minute. Somehow, he survived the whipping, and then he hoped that Heather was done punishing him for what he had done.
His heart sunk however, when Heather then said “I can’t even believe that you almost ruined all of my fine lingerie by leaving it up there in the sink, soaking in detergent water all afternoon. You are very lucky that everything is still in usable condition. For not taking care of my lingerie properly, you will receive ten strokes of the cane”.
As soon as Brandon heard that, he cried out as loud as he could, begging Heather to please forgive him, and to spare him any further punishment. Unfortunately for him however, before he was even done begging, Heather hit him very hard with the cane, and Brandon screamed out as the burning pain spread not only across his ass, but disseminated through his entire body, as the sting of the cane verberated across his ass cheeks.
Heather ignored Brandon’s cries for mercy, and proceeded to bring the cane down harder and harder with each stroke across his ass, as he screamed out in pain.

Go to Amazon Today to get your Copy of “Caught In The Act – Part II: The Cuckolded Sissy”