The door read: Tessa Saint.
The truth was: she was nothing of the sort.
Even the name was a lie.

The woman most men fantasized about, a domme, a walking wet dream, and a master with a whip, Tessa Saint took charge and delivered on that fantasy. But Emmy–the woman Tessa became once she walked out the door of the club–was getting tired of the game. It was time to try the vanilla life.

The door read: Nathaniel Walsh
The truth was: the man was an open book
Emmy was interested in reading.

Nathaniel was instantly attracted to the enigma of Emmy, and against her better judgement she lead him into her world of whips and blindfolds, kink and domination. Having a man unencumbered with perceptions of her lifestyle, Emmy could not resist Nathaniel at the tip of her lash, his willing bedroom submission.

The door read: Club Imperial
The truth was: Emmy hid there in the dark for a reason.
She should never have left the comfortable shadows.

Her secrets would find a way to the light- and it was only time until Emmy’s lies were torn away and the truth revealed. Nathaniel wasn’t ready for that.

Talk about Curious To Furious!

I will make this somewhat brief… This book is one hell of a ride! So this dives deeper into a Dom/sub type relationship.. To the point that I want to try some of these things that Nathaniel and Emmy/ Tessa tried in her dark room.  Hell their sex scenes period were off the chain! What I loved about this story was how the story was told. 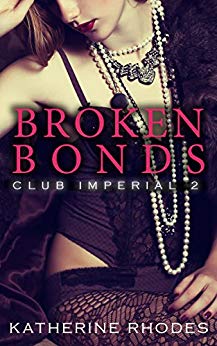 The door read: Club Imperial
The truth was: It could never hide all your secrets.
Emmy learned that the hard way.

Behind Club Imperial’s doors lay all of those Emmy never wanted to share. Secrets she wanted to hide forever from the world. And Nathaniel.

As she lay unconscious in the hospital, beaten and bruised, Nathanial never left her side. He didn’t want her lifestyle—their lifestyle—to take away from the justice her attack deserved. Slowly, as Emmy started to recover, she started to accept all the good in her new life…

Until the day her phone rang and her world, all those secrets, came crashing down around her.

Terrible things she left behind suddenly reappeared, and her scars were ripped open. Emmy wasn’t sure she could survive the pain, again, and she had to let Nathaniel go to protect him from the hell of her past…

But Nathaniel wasn’t walking away.

Format: Kindle  EditionVerified Purchase
When I picked up the first book and wasn’t even half way through I knew I would need the second book.
I needed more, wanted more. I fell in love with the two characters. Emmy and Nathaniel. I wanted their relationship to work out.  I was surprised to learn the secrets of Emmy at the end of this book.