“The Brother-In-Law: A Tale Of Male Chastity And Female Domination”by Mistress Benay 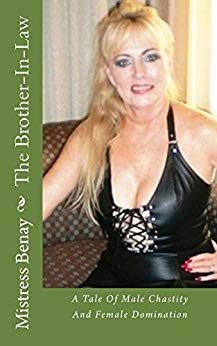 Mistress Benay was always one to take advantage of every Opportunity which presented itself to her whenever She could “Lock Up” any male with whom She came in contact with, into a Chastity Device.

In this Exciting and Sensuous Novel, She described the events which led Her to “Lock Up” Troy’s obnoxious Brother, Michael into a Chastity Tube this past July.  While the Mistress may have been motivated to “Lock Up” Michael because of the demeaning statements which he made about her husband Troy, She quickly found out that She was doing a great service to Michael’s Common Law Wife, Joanne.

Mistress Benay described in great detail how She mentored Joanne step by step, and assisted her in building a True Female Led Relationship with Michael Locked Up in his Chastity Tube.

This Novel will graphically describe for you how Mistress Benay guided Joanne and taught her how to take complete control of Michael, which changed Joanne’s life for the better, while transforming Michael into Joanne’s slave/husband.